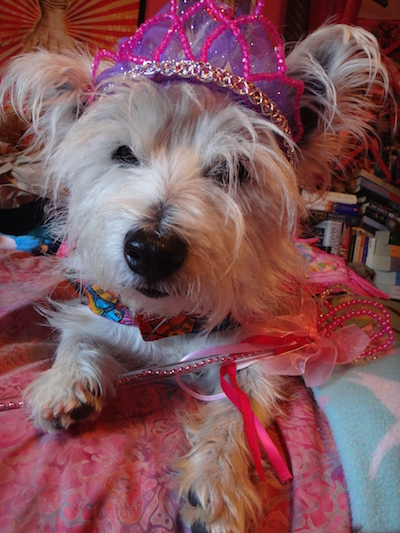 Once upon a time, in a land not so far away, dere lived a beeyootifull Westie princess named Whitley.  Whitley ruled over a vast queendom, spannin all da way from the Metropolis of Lost Angulus to da People's Republick of Cambridge (affeckshunately known as Moscow on da Charles).  Dis westie princess wuz no waitin-round-in-da-tower-for-a-man kinda girl (although she did LUV da boys).  She wuz an Independent Woman (all my women who independent, throw your paws up at me) and wuz fierce huntress.  She defended her various terriertories from ogre-like skwerrilz, evil rat monsters, dangerous flyin dragons, and all da associated weird two-legged creatures ya could find (which considering her terriertories encompassed Lost Angulus, Moscow on da Charles, and "Keep Austin Weird" Texas) meant a LOT of defendin.

Anyways, dis westie gurl wuz on a royal progress to visit a newly acquired terriertory named Sanibel, Florida when she got cursed by an evil witch in Mobeel, Alabama.  And dis evil witch made da Westie Princess not mobile.

Da westie princess' chief lady-in-waiting tried her hardest to figger out how to break da spell and even called in da help of da local sorcerer.  But dere wuz no luck in breakin it. 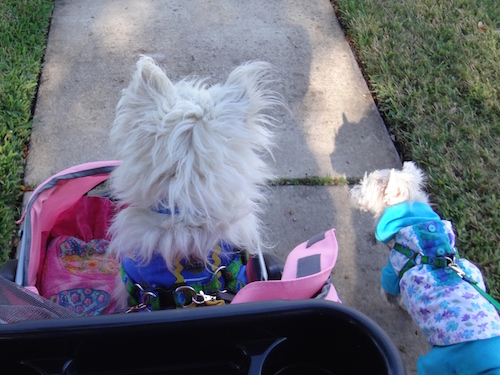 But da westie princess figgered out a way to get round anyways, wif da help of her Second-in-Line-to-the-Throne's momma, and rode around in a stroller to survery her suburban terriertory.  And bark it of course. 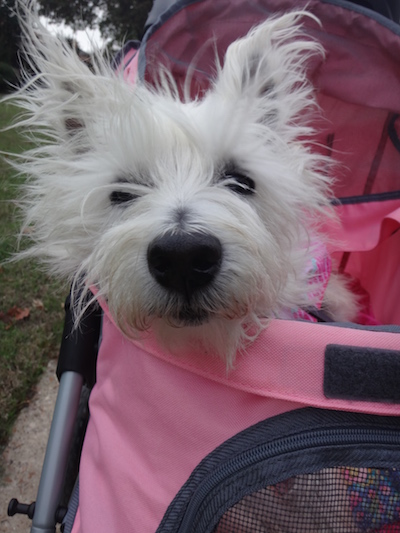 Roomer has it dat da ladies-in-waiting are developin a new spell to counteract what da evil witch did and it involves a set of Westie Wheels.  So stay tuned for more on dis fairy tale y'all! 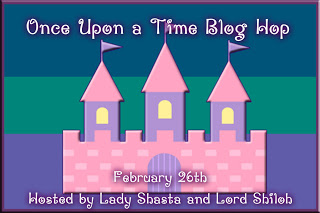 Posted by Kinley Westie at 6:06 PM