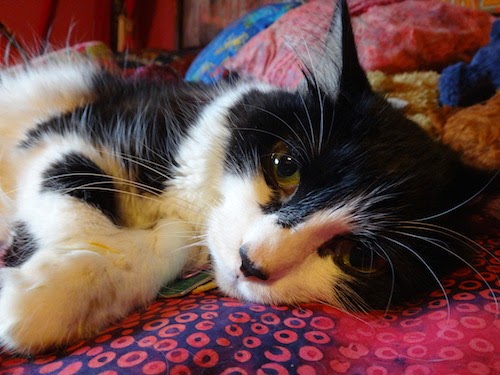 Da peeps got a call from da VetMan dis mornin, Maurice's white blood cell count are through da roof.  It are 56 thousand somefin and it should be round 16 thousand.  So dey took him in to da vet.  Da vetman wanted to do an ultrasound, but he couldn't get da ultrasound peeps to come today, so he referred Maurice to dis speshul diagnostic center.  When da peeps got da, da electricity in dat part of town were out, so Maurice couldn't get his ultrasound right away.  But dat vet said he felt a lotta fluid in Maurice's tummy.

Anyways, da power eventually came back on and Maurice got his ultrasound.  And da vet took a sample of some of da fluid in his tummy.  And he are thinkin it are FIP (Feline Infectious Peritonitis). Our regular vet had done a blood test for dat, but apparently doin a test on da fluid will let us know better.  But we might have to wait until Monday to find out.

If ya don't know what FIP are, it are a really awful disease.  There's no cure and no vaccine for it.  It are bascially a mutashun of da feline coronavirus.  Which lotsa kitties get and it do not cause dem a problem.  But when it mutates, it are nasty.  It uses a kitty's white blood cells, which are supposed to fight diseases, to help spread it round da body.  Dere's basically nuffin da peeps can do, except give Maurice some steroids to try to make him feel a lil better.  He also has some Baytril, just in case it are some kinda penicillin-resistent bacterial infeckshun.  But after da peeps read about FIP, it really sounds like what Maurice has.  Which means he probably won't have very much more time with us.

And he are only four.  And we's already lost 2 kitties in da last year and a half, Charlie and Jezebel.  It's so wrong dat somefin like dis are happenin to my Maurice.  I luvs him so much, me and him got to be really good pals when we lived together in Austin.  And he may have only a few more weeks left.  Dis are not right, he should be livin to 20 or somefin, not not even makin 5.

We's all real sad round here. 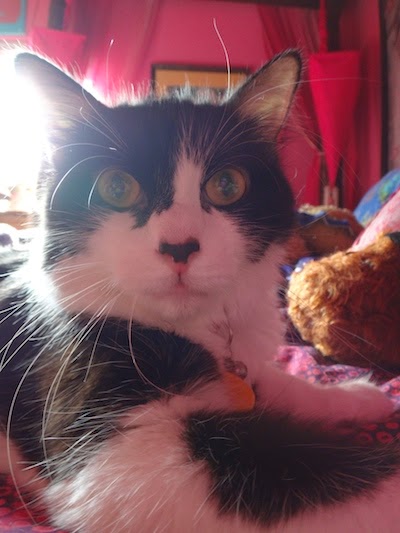 Posted by Kinley Westie at 6:19 PM