Hey pupses, don't worry, for now it are still me, Whitley.  My day were pretty good - I went on a walk zombie patrol dis mornin.  And I saw some zombies too - dere were even a dog zombie right outside my house.  I barked him good.  Dere were also a lady who said dat me and Finley were pretty, but she did not pet me.  What da woof???  If I's pretty, ya pets me.

And I were lookin extra pretty today - momma says I are so fluffy I looks like a stuffed animal.  Usually I lose some of my furs in da summer, but dis summer I are holdin on to dem.  Which momma says I may be regrettin when August rolls round and it are 113 or somefin. 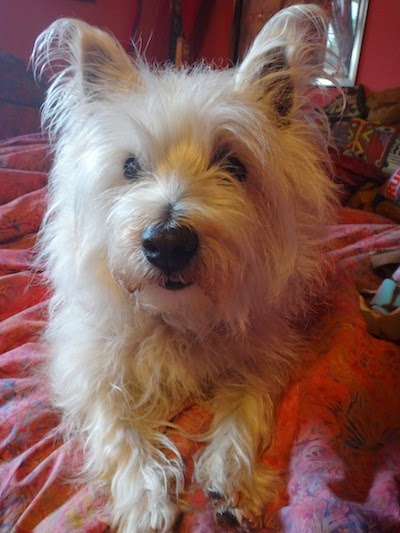 After we came home, momma did some exorcisin den she fed us pups.  Den me and her went out to play pool ball, dat were a lotta fun!! 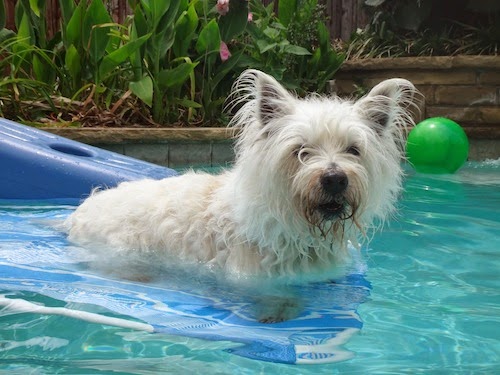 Ok, now ya know how some of y'all's momma's been takin over your blogs to show off da kroshayin and knittin and junk like dat?  Well, I's managed to keep all of momma's six hundred bazillion scarves off of my blog, but I told her she could show off her crossy stitch.  (Mainly becuz dere are a new scarf once a month and it took her a year to finish dis crossy stitch. BOL BOL!!)  She thought some of your mommas might wanna see it, I told her dey probably wouldn't, but we disagrees.  She says it are a Carousel Horse by Teresa Wentzler and dat it are real complicated.  ZzZzZz.  Snorfblatt, musslespart . . . 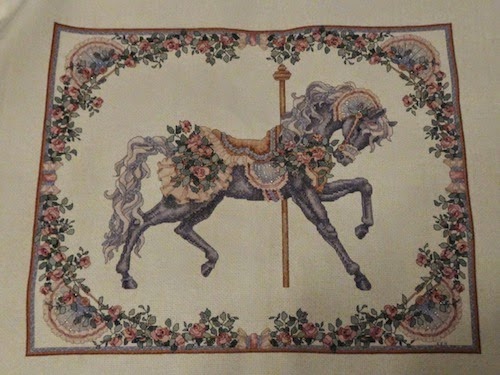 Well, I guess it are nice for a horsey, I fink a westie would be better.  Anyways, dat are enuf of dat stuff, from now on my blog are just me.
Posted by Kinley Westie at 5:51 PM